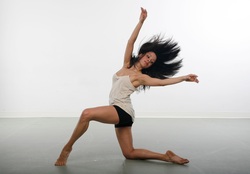 BEFORE GRACING YOUR TV AND FILM SCREENS, MAMA HAD A WHOLE DANCING CAREER!

Ballet Hispanico of New York, directed by Tina Ramirez
·  Toured and taught throughout the United States with the company.

School for the Performing Arts, San Juan, PR.  Directed by Waldo Gonzalez.
·  Taught children and adults the disciplines of Ballet, Jazz, Flamenco and Hip Hop at intermediate and advance
levels.